by Tim Disspain
February 7, 2018 Other Series Racing News0
ARCA Racing Series presented by Menards rookie driver Daniel Sasnett hopes the biggest start of his racing career will deliver a strong finish in Saturday afternoon’s Lucas Oil 200 driven by General Tire at Daytona (Fla.) International Speedway.
The former Richard Petty Driving Experience instructor has turned hundreds of laps around Daytona’s high-banked 2.5-mile oval, with the dream of one day competing in a sanctioned event. On Saturday, his dream will come true as driver of the No. 33 Standard Sand & Silica Chevrolet SS for Win-Tron Racing. 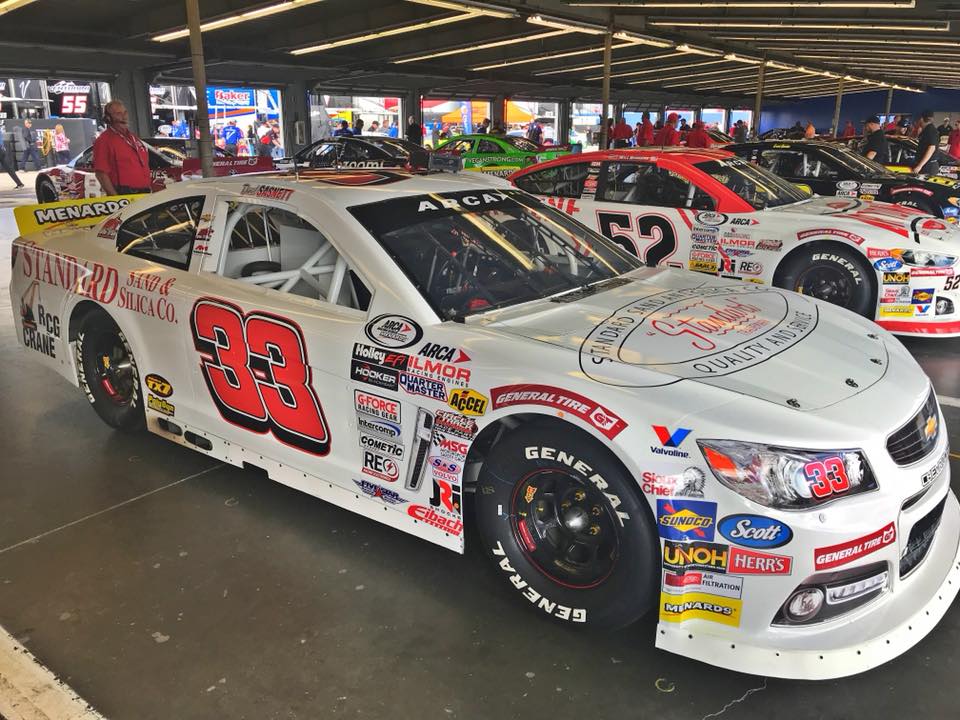 “I’m as ready as I’ll ever be,” said Sasnett, one of two drivers for Win-Tron in this weekend’s ARCA season-opener. “I can’t thank Win-Tron enough not only for the opportunity but working extremely hard to put this deal together in a few short weeks.”
While Sasnett is a new face to the veteran ARCA team, the Auburndale, Fla. native is familiar with the new speedway composite cars, a requirement for the Feb. 10 race. Last month, he participated in the two-day sanctioned test at the “World Center of Racing” with another organization.
After spending the first day in solo runs, Sasnett turned up the wick on the final day of testing and maneuvered the 12th quickest lap overall in preseason testing out of 62 drivers that participated.
“The test was pretty important to me,” added Sasnett. “Even though it was with a different team, our strategy was similar to Win-Tron’s. We worked on making sure the car was stable and then gradually made our way into the draft.
“I was fortunate to get with a good pack and turned a good time. Much of that will apply to Saturday’s race too. I need to find a good group to race with and make sure we do everything we can to be in the hunt for a good finish.”
Florida-based Standard Sand & Silica will back Sasnett’s ARCA debut.
Founded in 1945, Standard Sand & Silica is a leader in the manufacturing of silica sand.
Standard Sand & Silica supplies the Southeastern United States & Caribbean, along with Central & South America. Their products focus on the processing of sand materials for a variety of purposes, including ball field clays, golf course sands, fertilizer filler, grout and mortar sands.
“There’s a lot of people that helped make Daytona a reality, but without Standard Sand & Silica I would not have the opportunity tofulfill my greatest racing accomplishment yet,” he added.
“I’ll give everything I can behind the wheel. Hopefully, I’ll be able to work with my teammate Gus (Dean) and bring Win-Tron two strong finishes to the checkered flag.”
Team owner and principal Kevin Cywinski says Sasnett’s ability to get up to speed and be comfortable in the draft and talking with other drivers in the garage will prove to be extremely beneficial as his ARCA debut inches closer.
“Daniel has a quiet demeanor, but he is not afraid to ask questions to Gus, myself or even other drivers in the garage,” said Cywinski. “His experience at Daytona in the past should aid him in the quest for a good finish. We’re bringing him a really good piece and look forward to a good showing for both of our cars Saturday afternoon.”
For his superspeedway debut, Sasnett will steer the car that Dean posted the fourth quickest lap overall in preseason testing at Daytona in January.
Todd Myers will serve as crew chief.
Learn more at Win-TronRacing.com,Facebook or on Twitter @WinTronRacing.
The Lucas Oil Complete Engine Treatment 200 driven by General Tire (80 laps / 200 miles) is the first of 20 races on the 2018 ARCA Racing Series presented by Menards schedule. Practice begins Thurs., Feb. 8 with a two-hour session from 4:00p.m. – 6:00 p.m. A final practice session has been etched in on Fri., Feb. 9 from 9:30 a.m. – 10:30 a.m. Group qualifying is set for later in the day at 3:30 p.m. The season-opener for the 66th consecutive ARCA season is set to take the green flag on Sat., Feb. 10 shortly after 4:30 p.m. The event will be televised live on FOX Sports 1 (FS1), while ARCARacing.com will stream live timing and scoring throughout the entire weekend festivities.
Win-Tron Racing